REPLY & QUOTE
Emeritus (Eetu Tahvonen) said
Here's my latest build. Revell's (originally a Hasegawa kit, only recognizable by revell's harder, brittle styrene) Lancia037. The inspiration came from a friend of mine who says he has developed "an interest towards Italian cars", by which he means Lancia and Fiat. When he heard I had an un-built Lancia in my stash, he asked me to build it and send him some pics. So here it is: 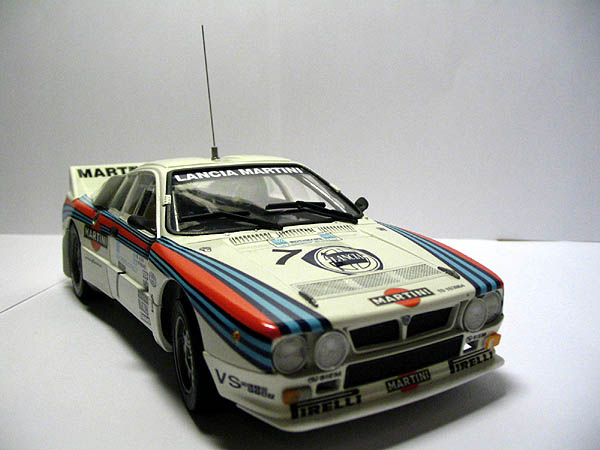 It's built straight from the box, except for the Eduartd's PE seatbelts I added. They're actually incorrect for this car but it's hard to see the difference through the windshield. This car had Sabelt seatbelts and my local model shop had correct Sabelt seatbelts but only with one set of belts per package. But Willans belts had two sets per package. (both sets were 8 each, I can't see what's the reason for this

) I didn't want to pay 16 for correct belts and bought willans's. I would have been easy to cut Sabelt logos from the kit decals that depicted seatbelts, but the logo part was curved so I just used the Willans belts. I also scratch-built the antenna mount, I don't know where I put the original part. 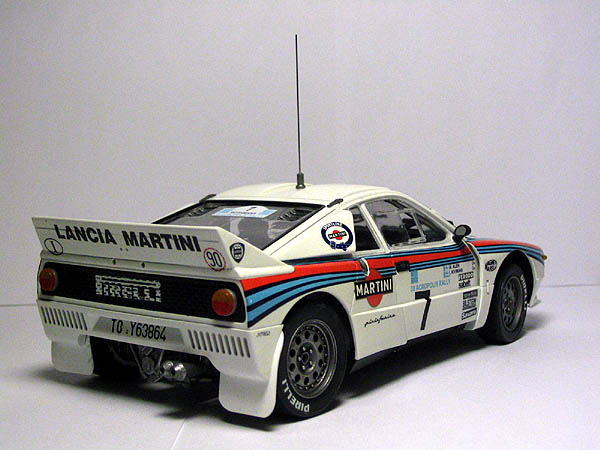 I painted my car with vallejo acrylic primer, which I sanded and then used maston's sprays for the white. Please note that didn't even try to get a mirror sheen. I admit the paint job could been a lot better, but in that case I would be polishing this thing for a year! :-) One coat on, wait a month to dry, polish, then you notice a hair or a piece of dust. What's next? Another coat of paint and another month waiting. Not this time!
That just wasn't for me right now. I really enjoyed building this kit without having to worry about flawless sheen. (maybe I'll some day build a car that I'll polish as well as possible)
One thing that surpised me was how micro sol can do wonders with decals. 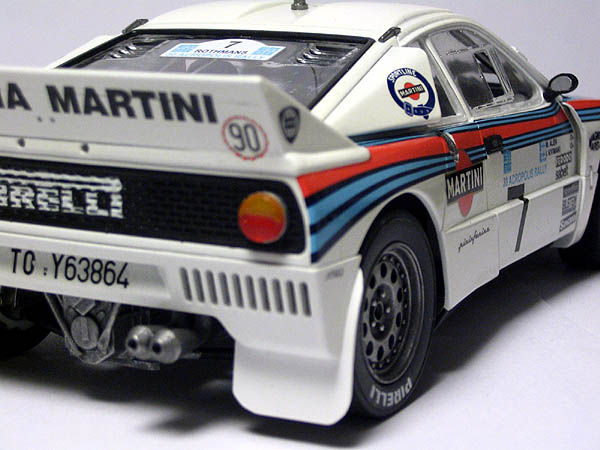 That Pirelli text goes on top of a panel that has a deep texturing. I thoght that I could never get a decal to conform to such texturing. How wrong I was! I just placed the decal, made cuts with a new knife blade over the decal where the recesses are (over the whole lenght of the decal, not just the holes), and then applied micro sol generously over the decal. After drying overnigth the decal had conformed neatly over the holes (well, not perfectly, but well enough it can't be seen with a quick glance. Still visible are some black showing through the holes in the decals, I'll touch up those with white) I also used generous amounts of micro sol with decals on the chassis. Everything went as planned and I applied a final gloss coat with Johnson floor wax (same stuff as future).
What's you're opinion, should I apply some weathering or leave it like that? 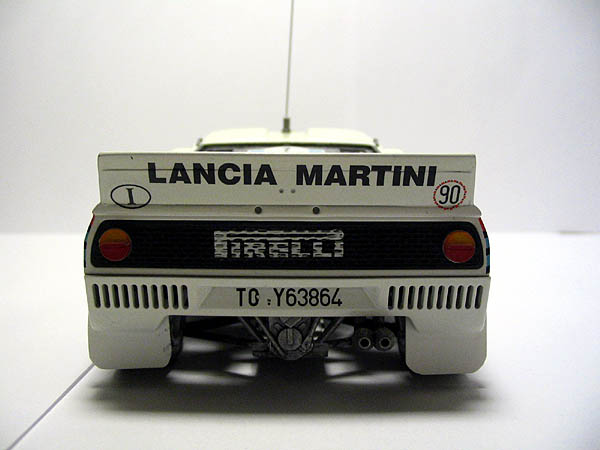 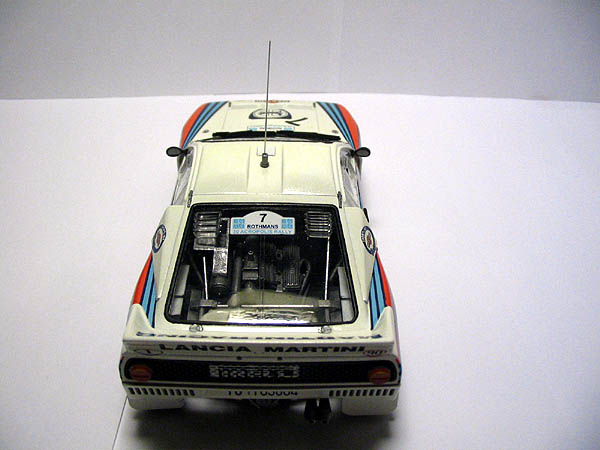 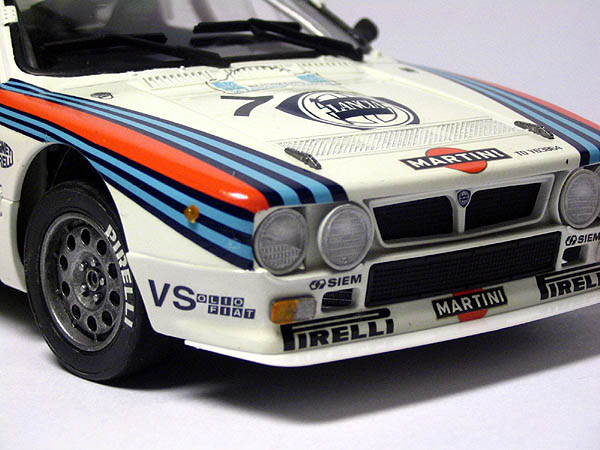 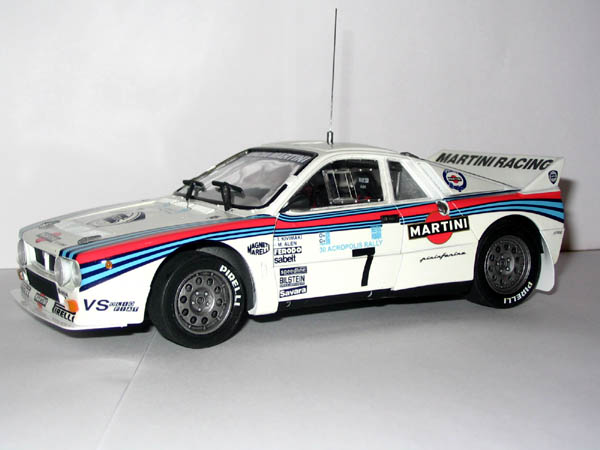 I am not a model car builder - I'm more into submarines, but got very curious about your post!
It remembered when I went and see Rallye de Portugal specials at Sintra, back in the 80's!!!

I think that your model looks great - excellent!!!

REPLY & QUOTE
Henk (Henk Meerdink) said
It would seem to be a shame to cover such a wonderful model in mud, so if you do some weathering, I would restrict it to some light dust around the wheel arches and the rear panel, and maybe a few mudsplashes. Looking as if it has just been on a reccy of the track, without going flatout.
You did a splendid job on those decals, especially those around the front corners by the bonnet.

REPLY & QUOTE
The early bird may catch the worm, but the second mouse gets the cheese...

REPLY & QUOTE
caanbash (Çaðýn Baþaran) said
I love that car, I don't know why but it is one of my favorites, and hey, you vave really done a very good job there! I love that model, looks very precise.

REPLY & QUOTE
Always look at the bright side of life.....with sun glasses !!!!

To weather or not to weather, that's the question. It depends on how you plan to display it. If you make a dio, then of course you should weather it, but if it will be diplayed on a shelf or on a "Clean" wooden base then weathering this beautiful model would be a shame. You could apply a gentle black wash to the panellines to give it some depth.

REPLY & QUOTE
Grumpyoldman (Dave O'Meara ) said
You got a really nice finish on that.... looks really good.
I agree with Henk, if you are going to weather it, go lightly.
Much too nice a finish to cover up.

REPLY & QUOTE
Character is what you do when no one is looking.
Few things are harder to put up with than a good example.- Mark Twain
Make yourself an honest man, and then you may be sure that there is one less scoundrel in the world.--Thomas Carlyle

It remembered when I went and see Rallye de Portugal specials at Sintra, back in the 80's!!!

Yes, it's highly possible you saw a same kind of car back in the 80's. I built my model to represent Markku Alen's car from early 80's.
Oh, and thanks for the compliments!

I thought I would never get those decals to confom to the front corners but with micro sol it went fine. I had to keep an eye on the decals while they dried. I had to prick a few bubbles and reaplly micro sol but the results were good.
I think I'll aplly some light weathering and a few mud splashes here and there and try some black washing on the panel lines.
Should I use acrylic or enamels washes or what, pastels, maybe?
I once tried acrylic washes (vallejo paints) on an airplane coated with floor wax and the wash dried almost instantly and I unable to remove it. Even washing with washing detergent and warm water didn't help. But another coat of floor wax washed the acrylic right off.

I'll check if model shops have suitable wooden bases for sale, or maybe an acrylic case.

REPLY & QUOTE
caanbash (Çaðýn Baþaran) said
Weatherng would good look on it but, if I were the one who built this car, I would stay clear from weathering... It is quite risky... Just my two cents...

By the way, this car is in the categoy that contains "dangerous cars" in the PC game Coin McRae 2004. You know, I love dangerous cars :-)

I wouldn't worry about polishing it. It seems to have enough shininess as it it.

I also wouldn't worry about weathering either...

There is allways that first moment when a car is revealed to the public, and it will look exactly like that.

So, build 2 figures who are taking some sort of cover off

REPLY & QUOTE
Currently on the bench:

and very nice workmanship..
We would like to see your other finished model pictures..

Now I noticed that the paint on the roof has developed some yellowing. I don't know how this can happen

The model hasn't been in direct sunlight and then it should have yellowed all over.

I haven't built a lot of car models. Just a couple of small kit when I was a kid. And I'm sure you don't want to see them! :-)
This Lancia is actually my second properly made car. The first is a Mini Cooper by Tamiya. It still has a matt finish.
I'll give it a coat or two of gloss and take a couple of pics and post them here!

especially the Pirelli decal at the rear panel!. I think it looks great as it is.